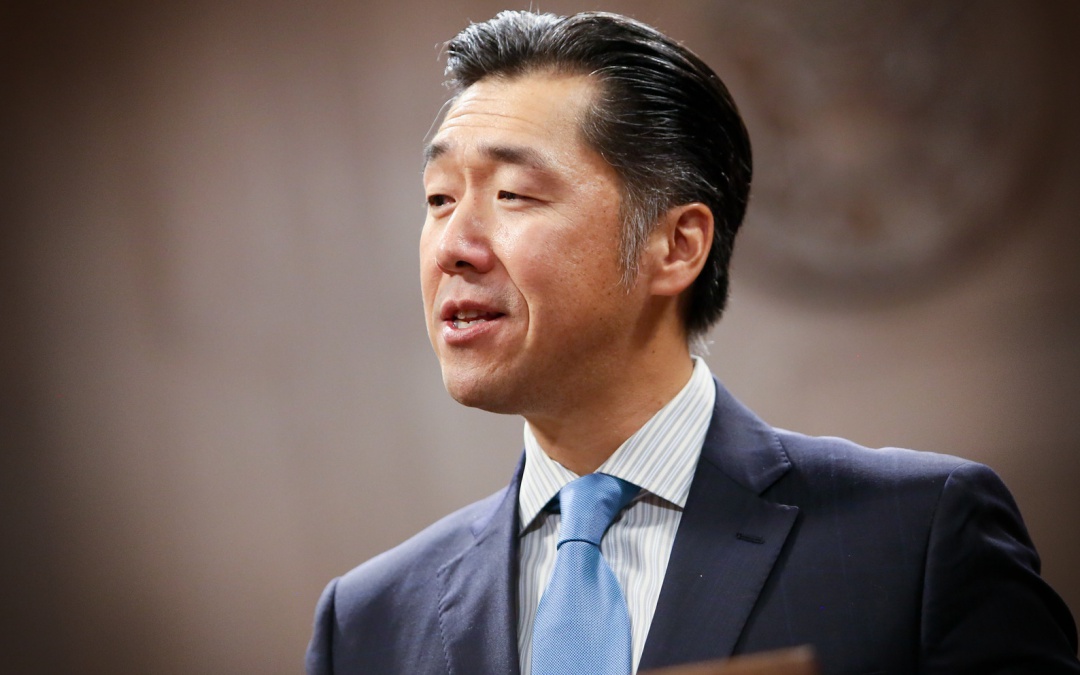 It is a great honor and a privilege to be back once again in my homeland of Korea and especially to be among such august members of the global community as well as leaders of business here in Korea. I hope that through this forum, it is impressed upon the leadership in South Korea that basically the calculus by which we evaluate our existence and purpose as a nation has changed; the status quo that has been the reality of this peninsula is no longer something that we can rely on in terms of how we look to the future and how this nation must move.

Instead of focusing on opinion, let’s talk about fact. The nuclear program in the North has now become an existential threat to the United States. So much so, that the United States no longer looks at the peninsula as an ancillary element of its foreign policy but as its primary focus. To a student of history like myself who studied American history in relation to its foreign policy in Asia, and particularly here in Korea, this represents a fundamental shift. The international attention that this is garnering is reflected in the media on a daily basis, not only in the United States, but also here in Korea. We here in South Korea need to understand this clearly, that the world has changed and, with it, the calculus in terms of which we engage with the North has also changed.

The United States is strongly committed to the denuclearization of the Korean peninsula as in its national interest, while Kim Jong Un pursues, in an unrelenting way, the nuclear capability to threaten the United States and the rest of the world. Experts are saying that they can only foresee two options in this scenario. Either North Korea stops their nuclear program on their own or through some diplomatic dialogue, which most likely they will not do; or there will be a military confrontation on the peninsula.

In one sense, having to deal with seventy years of potential conflict has numbed us to the current realities that the Korean people are facing today. Just a few months ago when I was meeting with key leaders within the Korean government, their assumption was ‘business as usual,’ that there was no way a potential conflict could happen on the Korean peninsula. There are even some here in Korea today who think the status quo is the way to go. This is where I really want to challenge the key leaders and the business community here in South Korea, especially those who think in that way. They are not factoring in this new calculus due to the existential threat that North Korea poses, not only to the United States, but also to every single one of its allies and, beyond that, to the free world as a whole.

So, I am very glad that my good friend, Dr. [William]Parker, came here and made everyone in this room sit up and take notice with his sobering picture of the risks we currently face in South Korea. I am glad you did that because what many of the leaders in South Korea, especially in the business community, are not factoring in, as they should be, is the potential for conflict on the Korean peninsula and what that will mean for South Korea.

So, one thing that we Koreans and especially the South Korean leadership needs to understand is that we no longer have the option to be complacent; that we are at a unique moment in time that can determine the fate not only of the Korean people, but of the entire world. There are two paths. Either there is peaceful reunification, or there is a potential conflict. This is why we stand at a critical moment when the Korean people collectively, not only here in the South but in the diaspora and eventually in the North, must champion the peaceful reunification of the Korean peninsula. If we do that, then the global community, I am certain, will galvanize around that collective dream to support us in building one unified nation along the lines of our ancestral philosophy of Hongik Ingan, which is to build an ideal nation to serve all mankind.

I know that there is a lot of talk, especially within academic circles, that the cost of reunification will be great and, therefore, it will affect the living standards of the average Korean. I completely disagree. Yes, there will be a short-term cost. But it is like any great endeavor. There is an initial cost in terms of investment but the returns down the road are well worth those initial costs. JP Morgan did a study where they forecast that a united Korea will be the seventh largest economy in the world. I think it will be even better than that. So instead of talking about opinion, let’s talk about facts.

So, let me give you some facts, especially the business leaders at this forum, that we need to consider when we think about businesses in South Korea. The top ten chaebols in Korea control seven percent of its GDP. This is a massive concentration of wealth in the hands of a very few. You have an unemployment rate of about ten percent of those in the age group between twenty and thirty, and yet the Korean worker is the best-educated in the world. Young people today — college-educated students or workers — have a hard time getting a job, even a menial job that was traditionally undertaken by those without a high level of education.

As a result, we now speak of ‘Hell Chosun’ in reference to the prospects for this demographic group indicating that they see no opportunity for themselves as they go forward. They don’t have a clue how to participate in the South Korean economy. They don’t have options. These are fundamental indicators of the basic inadequacies within the South Korean economy. The South Korean economy does not reflect a truly free market economic system. It reflects crony capitalism going all the way back to the authoritarian military dictatorship which chose winners and losers among enterprises. In the West, especially in America, we call that crony capitalism. And a lot of that is due to the structures within the Korean economy that favor those chaebols at the expense of everyone else.

I believe that there is a tremendous opportunity, given the crisis that we are facing from the North, to marry that situation to the true potential that exists within the Korean economy, which is the Korean people. The South Korean economy is going to face tremendous challenges in the future because we do not have the workforce to support our industries and our markets. As we become more industrialized, the mineral and other natural resources of the North will become an essential ingredient for injecting economic growth into the Korean economy. Most significantly, the twenty-five million people of North Korea will become the source of an expanded domestic market and labor force for the Korean economy as a whole.

So, the only way forward for the Korean people is reunification. If reunification can happen, not only will the South Korean economy have all the necessary ingredients to fuel the continuous growth engine that it is, but more importantly, it will remove from the Korean peninsula the threat, not only to the Korean people but to the rest of the world, of the North’s nuclear program. Finally, it will allow the Korean people to bring an end to this cruel chapter of division that mars our long, unified history and to be whole once again and to fulfill our national destiny to build a model nation that can serve all humanity. But if that is to happen, reunification has to be owned by every single Korean, not only here in South Korea, but throughout the diaspora and, ultimately, in North Korea itself.

Throughout 2018 and into 2019, the Global Peace Foundation, in partnership with Action for Korea United, is going to be advancing the One Korea Global Campaign. Based upon the vision outlined in my book, Korean Dream: A Vision for a Unified Korea, it will promote the idea of reunification around the world. We will frame the Korean issue as the civil rights issue of the twenty-first century. Just as Mahatma Gandhi’s campaign for Indian independence, inspired other nationalist movements after the end of World War II; just as Martin Luther King Jr.’s Civil Rights movement inspired people in other nations to deal with racial inequality; just as Nelson Mandela’s effort to end apartheid in South Africa taught the world to recognize the injustices of that separatist ideology based on race; the reunification agenda will be not only for the Korean people, but an example and inspiration for the entire world. When we consider the fate of the Korean people living in the North, deprived of rights and recourse to justice, not to mention opportunity, then this is indeed the civil rights issue of the twenty-first century. Its resolution through peaceful reunification should become the dream, not only of every Korean, but of every global citizen. So, I want to invite all of you to participate in contributing to the One Korea Global Campaign and spread the Korean Dream to the rest of the world.

Thank you very much.