Leading the Process of Peaceful Unification of the Korean Peninsula 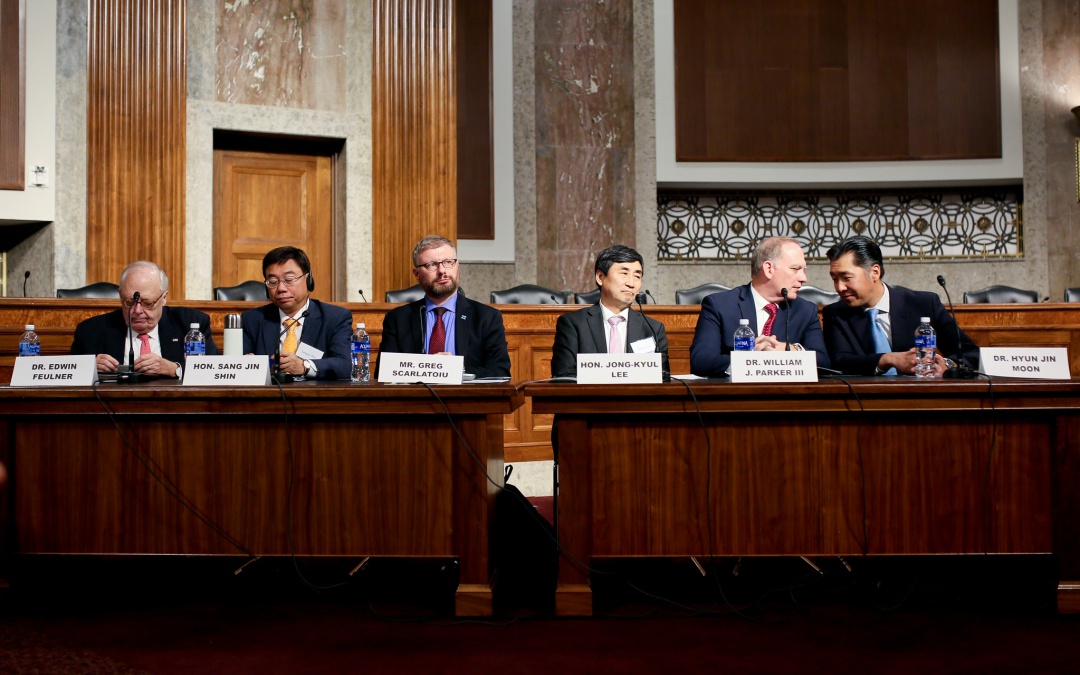 Distinguished guests of the International Forum on One Korea, and ladies and gentlemen! It is a great honor to deliver remarks in front of you in Washington D.C., the heart of world politics, under the theme “Leading the Process of Peaceful Unification of the Korean Peninsula.” First of all, I would like to extend my deepest appreciation to the Global Peace Foundation, Action for Korea United, the East-West Institute, and the One Korea Foundation for hosting this meaningful event.

As the Korean Peninsula remains trapped in a crisis spiral due to the North’s nuclear issues, it is a timely move to hold the International Forum on One Korea both in Washington D.C. and Seoul, led by civic society around the world, as part of an effort to address the crisis.

The 21st century in a mature democracy is an era of government by the people and for the people. In this age, the power of the citizenry can change government policy and spread across the international community, going beyond national borders.

As you are well aware, nuclear development by the North is the biggest barrier posing a threat to the peace and security of the world. Without resolving this issue, the world will be unable to move forward into the 21st century peacefully. The Korean peninsula’s problem is also the world’s problem. The destiny of the Korean Peninsula is directly linked to the world’s destiny.

As the peace of the world is seriously threated by the North’s nuclear ambitions, it is high time that the international community raise a voice in unison, based on a consensus on the necessity of addressing the nuclear issues of North Korea and the unification of the Korean Peninsula.

International consensus on the unification of the Korean Peninsula can be reached when the international community reaches an agreed vision of the unification and joins hands to help make that vision a reality, overcoming the old Cold War mindset. To this end, conscientious political leaders who seek peace and work for the realization of the universal human values around the world and civic society must play a leading role. Because civic society, in particular, affects the establishment and implementation of national policy, any civic organizations that are willing to play a part should cooperate and make collaborative efforts.

As a statemen, I would like to emphasize the historical significance that will be brought about by the unification of the peninsula. Human history has evolved to enhance human freedom and rights and spread political democracy. The speed of improvement and spread has been accelerated in the 21st century. The “Arab Spring,” which won the sympathy of the world several years ago, is an exemplary case of enthusiasm from people who pursue the protection of human freedom and rights as well as democracy.

It is the North’s turn to undergo such historical change. The regime must leave open the door for the North Korean people to enjoy authentic freedom, human rights and democracy. The international community must feel morally obliged to cooperate to solve this issue.

We must hold the North back from developing nuclear weapons and, at the same time, make an effort to reform North Korean society and pursue unification. This is because the North has nuclear ambitions that stem from reasons other than protecting the regime from external threats.

North Korea takes advantage of its nuclear development to suppress internal complaints and unite its people while causing tension and confrontation with the external world. All this is aimed at maintaining a regime that has been set up based on an undemocratic hereditary succession system. In this sense, it will not be easy for the U.S. to talk the Kim Jong-un regime into giving up its nuclear ambitions, without reforming North Korean society.

The problem is that the regime believes that introducing social changes is at odds with its survival. As hard as it has been for the regime to accept China’s reforms and its opening up, it will be all the more difficult for it to give up its nuclear development, the “last resort”, and become a responsible member of the international community.

As a result, the world community has adopted economic and diplomatic sanctions and applied various forms of pressure, except for military options, that target North Korea. We do not know how effective these will be. Therefore, one of the desired measures, I believe, is the redeployment of tactical nuclear weapons on the Korean Peninsula. This would lead the North to dial down its nuclear development and proliferation ambitions and, ultimately, make the Korean Peninsula a more peaceful, stable place without nuclear weapons.

I believe members of the international community should cooperate in a more active manner, going beyond the UN’s sanctions and pressure. Civic society should take the lead in making efforts to inform North Korean people of their reality and achieve change in North Korean society, with international collaboration. In addition to the redeployment of tactical nuclear weapons, providing North Koreans with information on the outside world is another effective way to make them aware of their current predicament.

Therefore, international society should engage in a collaborative effort. We need to provide quality content and spread external information in the North. By doing so, we can enlighten North Koreans and enable them to shape their own destiny as they take advantage of their democratic rights to reform their society.

In this regard, the International Forum on One Korea, led by civic society on a global sense, is meaningful on many levels as it has a series of sessions over different areas under the theme of the peace and unification of the Korean Peninsula.

It is particularly noteworthy that we are going to discuss the spread of information on the outside world during the session under the theme of improving humanitarian aid and increasing human rights for North Korea.

We need to take this opportunity to call for coherent commitment among political authorities around the world and action by global civic society in order to brace for the North’s nuclear threat to the world. Above all, we must seek measures for common security in Northeast Asia and world peace in an attempt to overcome security threats caused by the North’s nuclear ambitions.

Diplomacy is an important means to address conflicts and tension across the globe. However, it is more important that citizens support relevant government policy, and that such policy wins the sympathy and cooperation of members of the international community.

This forum will provide an opportunity for civic society and activist in the private sector to appeal to the international community and win the sympathy of its members, based on One Korea Initiative—they will understand the only option left for the two Koreas and members of the international community is achieve peace and unification of the Korean Peninsula. Only then can they solve the North’s nuclear issues at a fundamental level and make the world a more peaceful place, in the interest of all people.

I hope this forum will show members of the international community the right way to realize the peace and unification of the Korean Peninsula and to take the first, hopeful step toward peace in Northeast Asia and the world.

Once again, I would like to express my gratitude to the Foundation for warmly welcoming us and for all the preparation and effort that went into organizing this meaningful event. Thank you.