Reflections on the Declaration of Unification for One Korea 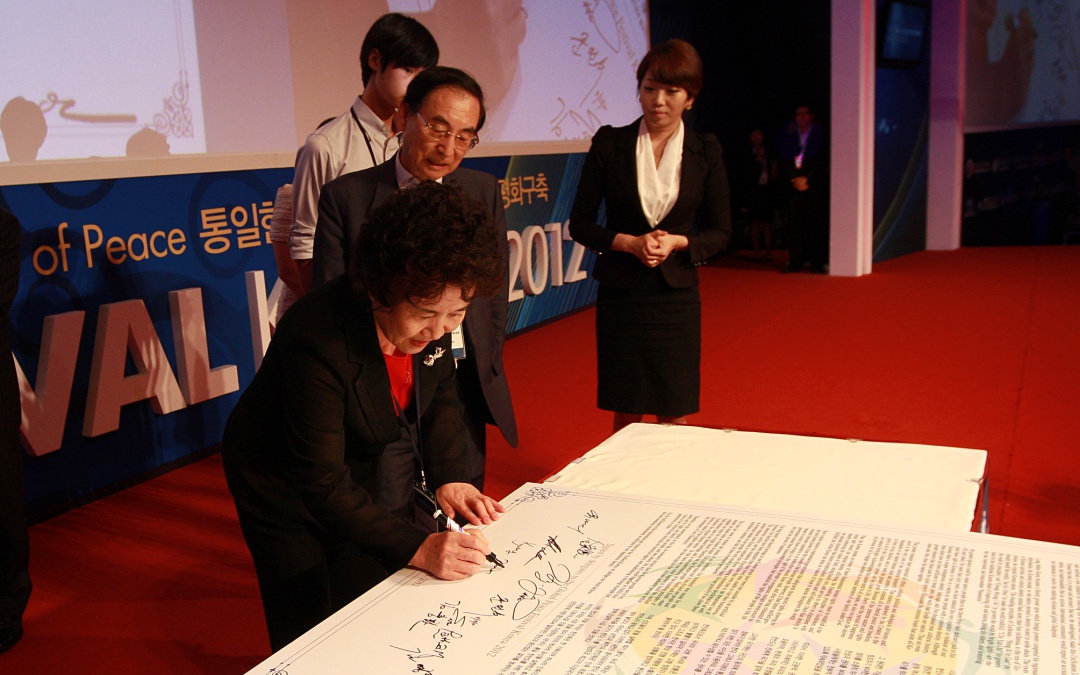 Note:The Declaration for One Korea and its guiding principle of Hongik Ingan, or “living for the benefit of humanity,” was explored for possible adoption in the new Constitution of One Korea at a session during the 2017 Global Peace Convention. Hongik Ingan was examined as a precious and defining heritage of Korean people, but at the same time as a governance principle applicable to all civilized societies.

The Declaration of Unification presented consists of 6 meanings and 6 action plans. First of all, it clearly states the reunification of the Korean peninsula is both “a fate(or necessity)” and “a hope.”

From the perspective of “a fate(or necessity)”, it indicates the Korean people has shared history and culture in one country and states that the difference between South and North Korea can be overcome thorough reunification. From the perspective of “a hope”, it suggests that reunification is the way to solve selfishness, political division and social conflicts in South Korea as well as North Korean people’s suffering and separated families’ sorrow.

Next, it states that it is Korean people’s dream to “achieve unification on our own” and “live in a proud one country.”he former expresses our people’s confidence. The Declaration presents the confidence from two perspectives, which are preparedness and meaning. In terms of preparedness, it mentions that present Korean people has reached the position to have “enough political and economic capacity to be able to build our future on our own.” In terms of “meaning”, it mentions that building a reunified country will be evaluated as a “great task any other people has not yet achieved.”

The latter expresses well the historical basis of such pride and forward looking orientation.

It has been our people’s “wish from the ancient times” to “build a model nation which is governed by moral values, universal principles and just laws and guarantees inherent basic human rights and freedom. “Capacity of present Korean people” became possible thanks to such wish held throughout long history. Moreover, it pronounces that our people will move towards ”a proud one country“ in the future through reunification, by suggesting that “a sovereign nation abundant in sympathy and humanitarianism which enhances peace and resolves conflicts in the Northeast Asia and the whole world” is a direction Korean people shall move towards.

In addition, by including the expression of ‘not threaten any other country’, it rightly expressed that reunification of Korean people has an international meaning to “benefit the world” as well as Korean people in current international situations. Moreover, it is further positive in that it expressed “Hongik Ingan spirit”, which is a philosophy of reunification, as a universal value by modernizing it as a true model of ‘a nation of the people, by the people and for the people’, not just retro nationalism.

Article 2 to 4 put forward various plans which South, North and overseas Koreans who constitute Korean people can put into action. Establishment of fundamental facilities as foundation for economic development, efforts to achieve mutual prosperity of South and North and private exchanges such as cultural exchanges and volunteer activities are specifically mentioned in article 2.

Article 5 and 6 mention support of international society. It is significant in terms that it requests that surrounding 4 strong nations and Mongolia paly a role. Mongolia is expected to be able to play a certain role since it has diplomatic ties with both South and North Korea and has succeeded in the regime transition. Several years ago, president of Mongolia made a speech related to human rights to North Korean students. Article 6 raised concreteness of the role of international society by specifying international organization which should make efforts towards reunification of the Korean peninsula.

Even though the Declaration is well written overall, I would like to add several points for supplementation. Declaration of Unification is like a doctrine for Korean people in the present time. Therefore, it is my view that it needs to espouse more firmly a clear vision for the future which reunification will bring to Korean people. Though there may be much worthy of inclusion, I would like to introduce 7 visions of chairman, Mun Hyun-jin who has championed a Korean dream.

First, “Hongik Ingan spirit” should be realized.Second, the government should be a representative government which represents what people want and obtains support from the people third, through an education system which even advanced countries envy, emotional and spiritual education should be provided to our children from childhood.Fourth, entrepreneurial spirits should be promoted and moral free market economy system should be pursued.Fifth, press media should be participatory, objective and independent enough to speak unpleasant words to power on behalf of all Koreans.Sixth, recognizing that ethics is most important in building a model civilized nation, spiritual traditions should be allowed to play a certain role in public arena as an advocate of moral behaviors.Seventh, merits of sacred enlarged family system of our people should be preserved.

Moreover, there should be consistency in views on issues the Korean peninsula faces. For example, views on human right issues and nuclear issues of North Korea must be included. North Korea with hereditary succession of power over three generations up to Kim Jeong-eun shows a typical representative of evil from the execution of Jang Seong-taek to the killing of Kim Jeong-nam

Chairman Seo In-taek of the Global Peace Foundation of Korea told that reunification is not a compromise with evil but a way to keep human dignity through justice, good and moral. The North Korean government which threatens the world with nuclear weapons and commits oppressions on human rights unprecedented in human history is an evil which we cannot live together. In terms that comprising with evil is far from “Hongik Ingan spirit”, we need to incorporate consistent views on issues that the Korean peninsula currently face.

Many agreements between South and North Korea should be reviewed from forward-looking perspective. They should be reviewed in light of “Hongik Ingan” and what is deemed unnecessary should be dropped because there are parts which lost relevancy due to the lapse of time and cause different interpretations along political lines,

Lastly, I would like to emphasize that it is civil society that announces the Declaration of Unification, not the government. Since the Declaration is suggested by the civil society to Korean people and the international world, it should be mentioned that the power of citizens is an ultimate driving force to propel historical changes. Reunification is a huge historical change to determine the future of our nation and the order of world history. All historical changes recorded in world history were propelled by the power of citizens, not by one or two great political leaders. Reunification of the Korean peninsula can be recorded as a historical change realizing “Hongik Ingan spirit” when voluntary capabilities of all the citizens in the world are put together.

An example of such voice which is representative of Korean people in our history is the March first Declaration of Korea Independence. Even though it cannot be a direct model since it is almost one century apart, there is one thing that deserves to be referred to in terms of the method to express sentences.

First, ‘On behalf of our 30 million Korean people, Korea Youth Independence Group declares Korea’s complete independence before all countries of the world that have acquired the victory of justice and freedom. (first part of 2.8 Declaration of Independence)

We herewith proclaim the independence of Korea and the liberty of the Korean people. (first part of 3.1 Declaration of Independence)

Implications of these sentences seem to be similar at first glance but they are fundamentally different. In sentence 1, independence is a practical objective to achieve but in sentence 2, it is announced as a practical fact.

The March first Declaration of Korea Independence has a unique mentality, which is a mentality of self esteem and justice, by pronouncing that independence is a practical fact to maintain, not a future task to achieve.

When the independence is based on inherent self righteousness, not coming from outside sources, it is an outcome of spirits of self independence and esteem despite any suppressions, and such self esteem comes from belief in realization of justice, not coming from the sense of exclusive superiority.[1]

The method to express sentences in the Declaration of Independence currently presented is the same as that of the February Second Declaration of Korea Independence in that independence is described as a ‘practical objective’, Just as an unanimous wish of the whole Korean people was reunification one century ago, the current unanimous wish of the Korean people is also reunification. Wish of reunification does not come from outside sources but is based on the inherent sense of self righteousness and is an outcome of self esteem striving not to lose dignity despite any oppressions, and such self esteem does not come from the sense of exclusive superiority but comes from belief in realization of justice. Therefore, I think that adopting such method to announce independence as ‘a practical fact’ like the March first Declaration of Korea Independence is desirable.

The issue to establish ‘fundamental facilities for foundation of economic development’ mentioned in the first sentence of article 2 is positive in a sense that it points out the importance of infrastructure, but it is better to emphasize the issue in a separate article in terms of the construction of the Declaration.

In article 6, ‘investment’ needs to be mentioned along with ‘advice and cooperation’ of international society. Because even though ‘cooperation’ seems to include ‘investment’, there is a need to emphasize the importance of financial investment.