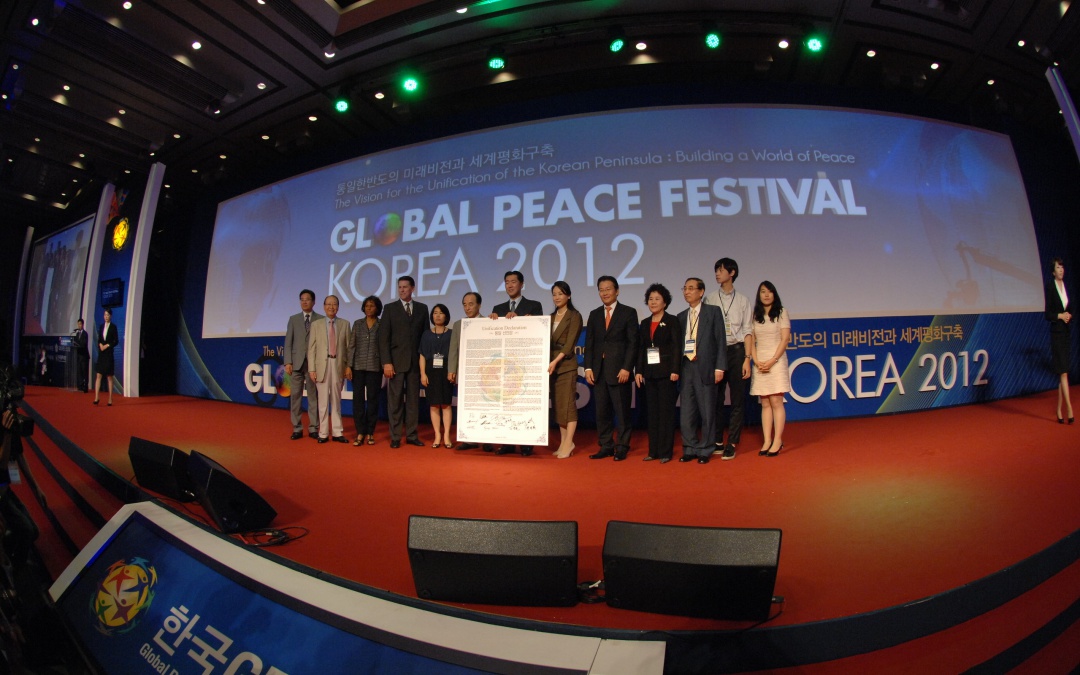 Theme: “The Future Vision of a Unified Korean Peninsula, and Building a World of Peace”

Esteemed guests, dignitaries, parliamentarians from around the world,— especially from this nation of Korea— civic leaders, friends, ladies and gentlemen: It is a great honor and a privilege to welcome you to the nation of my birth, and the nation of my ancestors, for this Global Peace Leadership Conference and the Global Peace Festival. This, I believe as a Korean born many years ago in this land that moved to a different nation, the United States of America and adopted that nation as my home yet my heart has always remained with this nation, my hopes and my aspirations have remained with this nation.

It is so moving for me to see that over the course of four decades that I can once again come back to the land of my birth with such dignitaries from all fields and such society as well as nations around the world. In this room today we have religious leaders from all the different faith traditions, we have political leaders, we have academics, we have recognized philanthropists, and social workers and civic activists, we have people from the media, as well as every other sector of society to share in one dream, that dream ultimately to bring a great awakening enlightenment from all of our seven close to six billion I believe now, people around the world to recognize that we are truly one family under God.

This issue that we shall tackle in this forum I believe is historic for this nation of Korea especially given the representatives that will represent the Korean contingent. We have more than 400 civic organizations that have joined with us in this grass roots movement to build awareness that reunification or unification is a true and only path to the peaceful reconciliation of the impending crisis here not only in the peninsula but also this region. I would like to take the time right now to applaud all those civic leaders– if we can give them a round of applause.

To marry that grass roots civic movement that spans ideological political divides, that spans different religious divides to recognize that we as Korean people have a destiny. Being a man of faith I believed that destiny is rooted in providence for this very nation of Korea. I hope that we as Koreans can get inspiration in our ancestry for 4000 years ago under the philosophy of “hong ik in gan” the Korean people believe that they had a destiny not only for the welfare of the Korean people but for the world. They had a philosophy that recognized that we were truly one family under God.

And that the Korean people played a special role in bringing about that realization to the world. I believe that this is that moment. You know, we saw the spirit of the young people of this nation that propelled a nation of less than 50 million to be rank fifth in terms of gold medal ranking in these current Olympics in London and I believed that the spirit of the Korean people was captured by that gymnast. Now you have to remember that Korean never won a medal in gymnastics. Being a former Olympian myself, I know how difficult it is, especially if your nation have never won a medal in a certain field of competition, yet he had the audacity to dream that not only will win the gold medal, but that he will set a new benchmark of excellence in that field.

And we saw in all as that young man propelled himself into history as he bolted off that horse and won the gold medal for this nation of Korea. That audacity to dream captures the spirit of these people and I believe this is the time with the support of the international community that we allow, we encourage the Korean people to dream. To dream the greatest dream of all, the dream to build one family under God. But to set that precedent in this nation, to be one nation under God.

Many of those principles and values existed in this nation of Korea, and its founding more than 4000 years ago. I believe that there is a special role that Korean people can make on a global stage. For although this nation and America might be separated by a great ocean, the principles and values that we take for granted in this modern age, that’s the fundamental basis of human rights and freedoms with the very basis upon which this nation, this people of Korea obtained their national identity. I believe that with a grass roots movement acknowledging these principles and values that we can uplift the dialogue from confrontation along ideological, political and economic lines to a greater noble effort. That of course starts here in the south but moves to the north, and as a collective that represents the voice of Korean people both North and South, that reunification can truly come about.

So I believe that we stand in a watershed moment in which this movement is to begin. I want to encourage our Korean participants to truly be the owners of this process. And I want to encourage our international participants to support this endeavor, to go back to your respective nations and tell them of this beautiful process unfolding in this peninsula, that is not the only hope of the Korean people but the entire world. Thank you very much.