Dr. Jae Yun Kim on the Reunification of the Korean Peninsula at GPC 2012 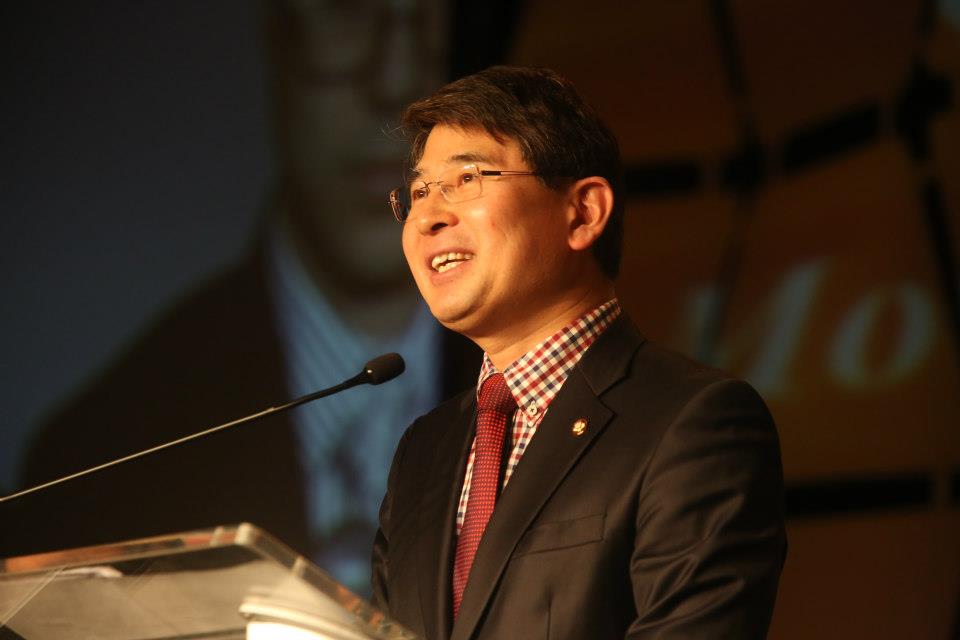 Respected Chairman of the Global Peace Foundation, Dr. Hyun Jin Moon, distinguished former heads of state from 8 nations of Latin America, and guests from China, Africa, Kyrgyzstan, the Philippines and all around the world, Senator Jones who is the co-chair of this convention, and Dr. Robert Schuller, Ladies and gentlemen!

How are you today?

I am Jae Yun Kim, a parliamentarian from the Republic of Korea. The people of Korea are 20 days away from electing the 18th president of the nation. A very busy time.

The reason my voice sounds expired is because I have been working very hard on the elections prior to coming to this convention.

Although I have many responsibilities to fulfill related to the Presidential Elections, I decided to arrange my schedule to come to the 2012 Global Peace Convention because I felt that this event in Atlanta is very meaningful.

Despite it being the elections period, I decided to participate here because I truly believe that this event can help in the process of peace and reunification of the Korean peninsula.

I want to offer my gratitude to all of the leaders from respective countries who are participating here today, who came to discuss issues that need to be resolved based on the common vision of “One Family Under God” and under the theme of “Moral and Innovative Leadership”.

It is clear that there are limitations to bring about sustainable development and peace in the 21st century only through diplomatic negotiations between governments. There is a desperate request for “global governance” with the participation and co-operation of civil society.

The GPF movement, which is active in 6 continents and 23 countries since 2007, focuses on overcoming local and regional iniquities through inter-religious cooperation, strengthening family values, and social service, thereby substantially contributing to stability and peace.

I want to express my thanks and gratitude to the Global Peace Foundation for being pioneers in efforts of establishing peace in the Korean peninsula and generating the proper environment for reunification in my country that is currently divided and has been in a cease-fire for 60 years.

After the Second World War, the Korean people fought a bloody war where brothers and sisters shed blood and our peninsula was divided into North and South. Even though 20 years have passed since the Cold War ended, the reality is that the world still remains as a tense and volatile place, where militaries are pointing their guns at each other.

Since 2011, the Global Peace Foundation, under the leadership of Dr. Hyun Jin Moon, has raised awareness and involved political, religious, academic, and civil society leaders on these relevant issues in Mongolia, America, Japan and in other nations surrounding the Korean peninsula, in order to strengthen cooperation to find ways to solve our current predicament.

Moreover, GPF has promoted the importance of a reunification movement at the level of citizens, and established a factory in Sari-Won in North Korea as part of their humanitarian work based on the principle of universal brotherhood; this factory produces 5,000 pieces of bread to feed North Korean children every single day. I want to give a big thanks to GPF for promoting this type of “life-style reunification movement” which breaks down the psychological barriers and the hostility among our peoples.

First, the denuclearization of the Korean peninsula has to become a reality.

Second, North and South have to establish a structure for cooperation where both sides come out winning based on mutual respect and trust.

Especially, there should be regular opportunities of meeting for families estranged in the North and South divide.

Fourth, we must expand the range of understanding and cooperation through an exchange of parliamentarians of both sides.

Fifth, we need to establish a North-South Economic Community. Thus, reducing the economic gap between North and South. This way we can envision an economic community that can be beneficial to all parties.

Sixth, the new president elected in the upcoming elections should call forth a Summit of North and South Korea that can serve as a foundation to do away with the current structure that only maintains conflict, and should seek for harmony and cooperation.

The dream of reunification in the Korean peninsula will come as a spring breeze comes when the time is right. The flower blooms after overcoming the harsh winter.

North and South will become one.

I am confident that Dr. Hyun Jin Moon will play an important role in making the reunification of North and South Korea a reality.

Ladies and Gentlemen! Let’s offer a round of applause to Dr. Hyun Jin Moon who is spearheading this initiative for North-South reunification and for world peace.

The world today is at a crossing point between hope and unrest. In this 21st century we should take ownership of our world and be the actors that together cooperate to overcome the problems of our world.

The problems that threaten our world today require a fundamental change in our values and in our way of thinking.

That is why we are gathered here in this convention in Atlanta to discuss these issues that range from the reunification of the Korean peninsula, to integration between the North and South Americas, to balanced development and cooperation around the world, and seeking international cooperation for sustainable development. I believe that this will serve as a historical moment where our efforts make this a reality.

Essentially, I believe that it is when we make the vision of One Family under God into a reality that true reunification and peace can be established by bringing down the walls of ideology, race, ethnicity and religion that tend to divide us.

I hope that everyone here today can make the dream that Martin Luther King had into a reality and together let’s dream to make One Family under God. And I believe that the issues I raised earlier can become true if we work together.