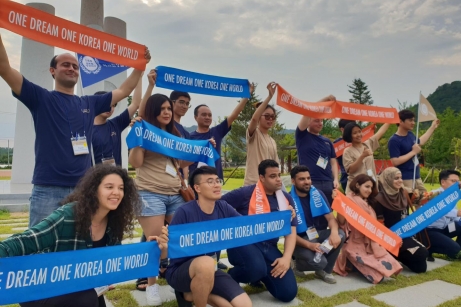 As a plane took off for South Korea, Allison Yheraldin gazed out the tiny window to see her beautiful homeland of Peru grow smaller in the distance with the clouds eventually enshrouding the city below. She was traveling halfway across the world as a foreign exchange student to study biotechnology at Korea University.

As Alisson settled in and began her studies, she soon discovered that South Korea’s technological advancements, economic prosperity, and extremely high standards of education, could not mask the pain that the Korean people felt in their hearts every day. The division of the Korean peninsula is an ongoing human tragedy with hundreds of thousands of families still separated in the North and South. Over the past few decades, tens of thousands of North Koreans have risked their lives to escape their closed-off, impoverished life in the North to resettle in the South, often leaving family members behind. 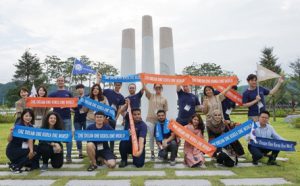 Alisson would also soon realize that a growing movement of Korean citizens are refusing to accept the status quo and are daring to dream of a reunified nation. She shared, “As I realized the importance of the unification of the Korean Peninsula and learned about the inspiration behind the March First Movement, my worldview broadened. The people of the world should work together to make a better, more peaceful world.”

As Alisson walked down the same road that the Korean independence leaders once walked down nearly 100 years ago during the March First Movement, she learned that the vision that inspired the Korean people to come together in the mass peaceful demonstrations against colonial rule on March 1, 1919, is the same vision that is the driving force of the One Korea Global Campaign. As an initiative of Action for Korea United (AKU), Global Peace Foundation (GPF), and the One Korea Foundation, the One Korea Global Campaign is bringing together the Korean people from the North, South and diaspora and drawing support from the international community in advancing the Korean Dream, a vision for a unified Korea that upholds human rights and freedoms and spreads peace to the world.

Alisson’s experience was made possible because of her participation in the Global Peace Ambassadors program, a select group of foreign exchange students from around the world that are supporting the Korean people in establishing a lasting peace on the Korean peninsula.