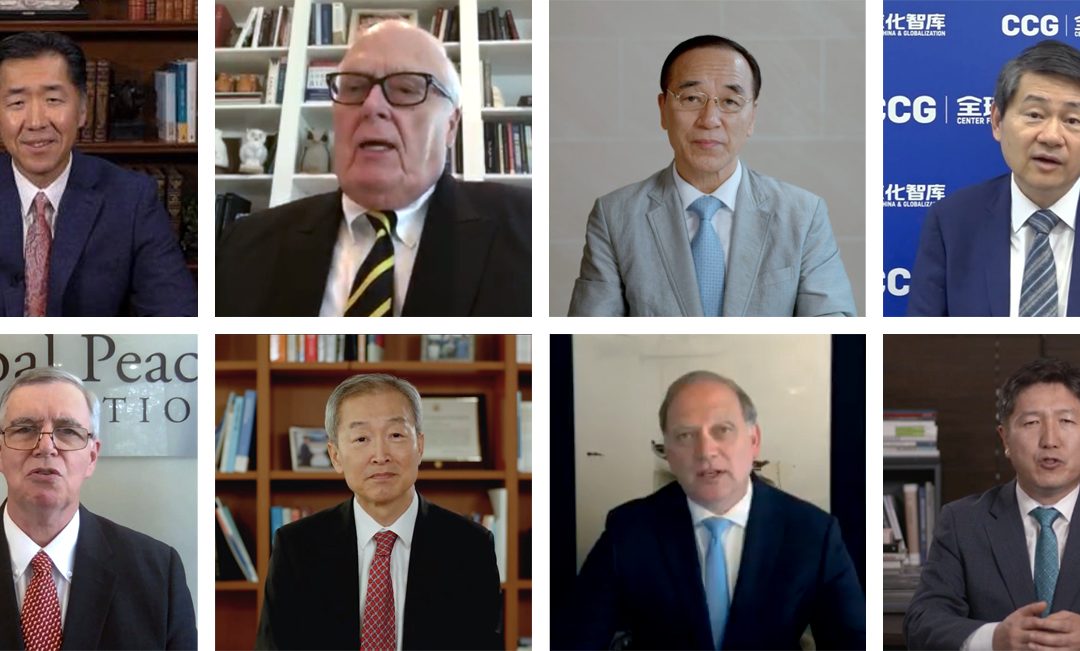 Leading Korea experts, policymakers, and civil society leaders examined new international circumstances and opportunities for advancing Korean unification at an International Forum on One Korea: “Realignment amid Global Changes: New Opportunities for a Free and Unified Korea,” on August 15, 2020. 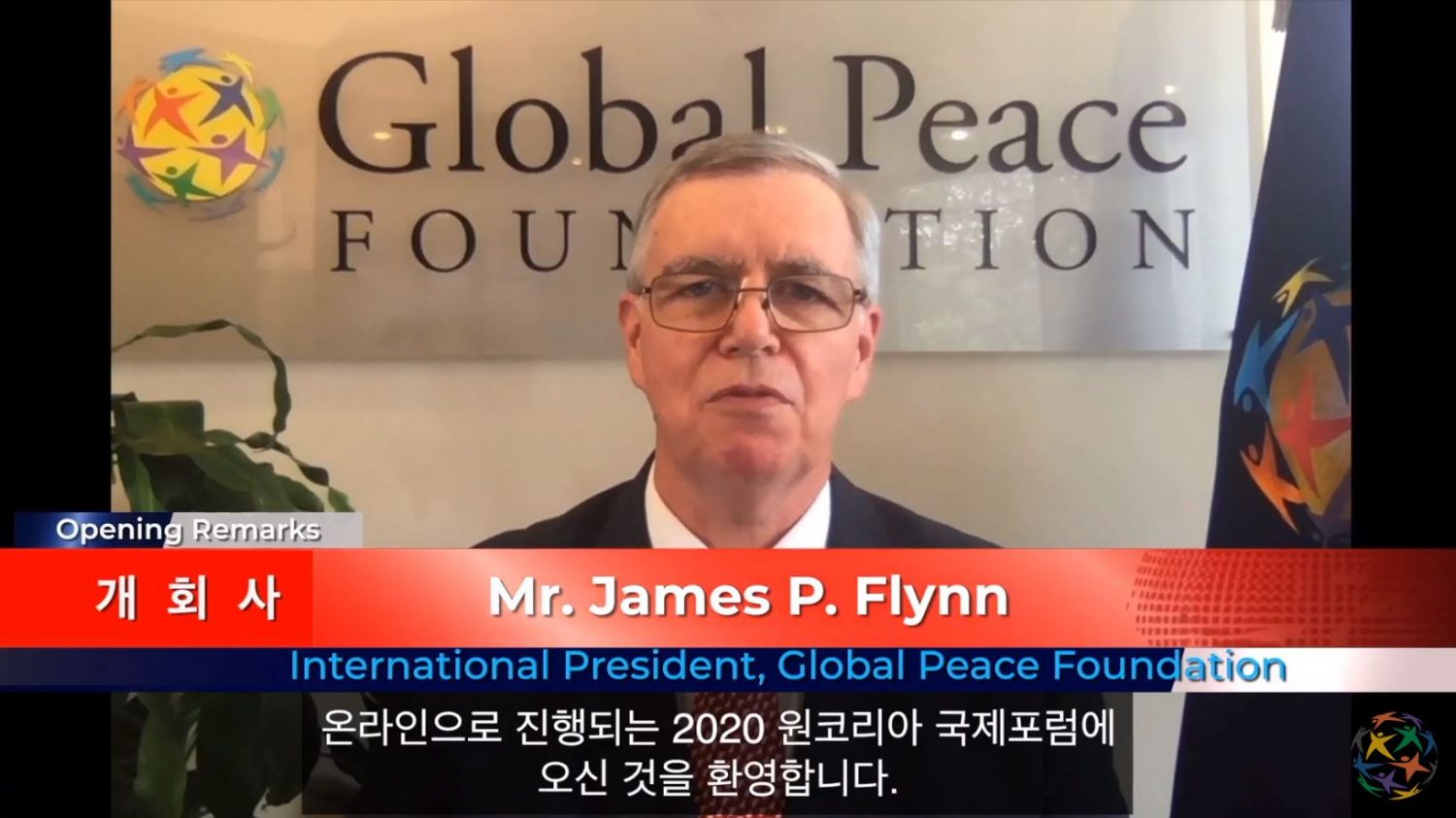 Scheduled to convene in Seoul, the forum was hosted virtually due to the global pandemic, marshaling international participation with nearly 3,000 scholars, civil society leaders, and peace advocates from 90 countries joining the forum.

Noting the pandemic’s disruption of the social and working lives of people worldwide as well as relationships between nations, Global Peace Foundation Chairman Dr. Hyun Jin Preston Moon stated its “significant political as well as economic ramifications [are] forcing re-evaluation of old models, while at the same time opening new opportunities.”

In opening remarks, Kim Choong Hwan, chairman of the Institute for Peace and the Unification of Korea and former chairman of the National Assembly Foreign Affairs, Trade, and Unification Committee, described a nuclear-armed North Korea as “a timebomb.” He urged the United Nations, the United States and China, and other countries related to the Korean peninsula issue to discuss not only North Korea’s nuclear status but also the unification of South and North Korea, setting aside differences even as the United States and Russia cooperated in the German unification process.

Addressing the forum representing the Republic of Korea, former ROK Ambassador to the United States and current president of the University of North Korean Studies Ho Young Ahn said the first step toward unification is to build national consensus based on values of freedom, democracy and human rights, and the right to choose and practice one’s religion. “During the past year,” he said, “we saw many developments inimical to those values, [including] a virulent, aggressive and hostile type of nationalism spreading around the world, which undermines those values we cherish, and, in fact, is undermining the basis for unification.”

The ambassador said unification will have to be achieved based upon respect and good faith between South and North Korea, yet “North Korea continues to threaten South Korea with military provocations and pillory South Korea with contempt.” He speculated that North Korean provocations were expressions of frustration from economic sanctions, the result of its “obsession with its weapons of mass destruction.”

Ambassador Ahn also stressed the international dimension, noting the partnership between President Bush and Chancellor Helmut Kohl and a common understanding among all the important nations related to German unification.

Panelists from the United States expressed grave concerns about North Korea’s nuclear capability and closed society, while noting the significant role that civil society can play in bridging the division between the two Koreas. 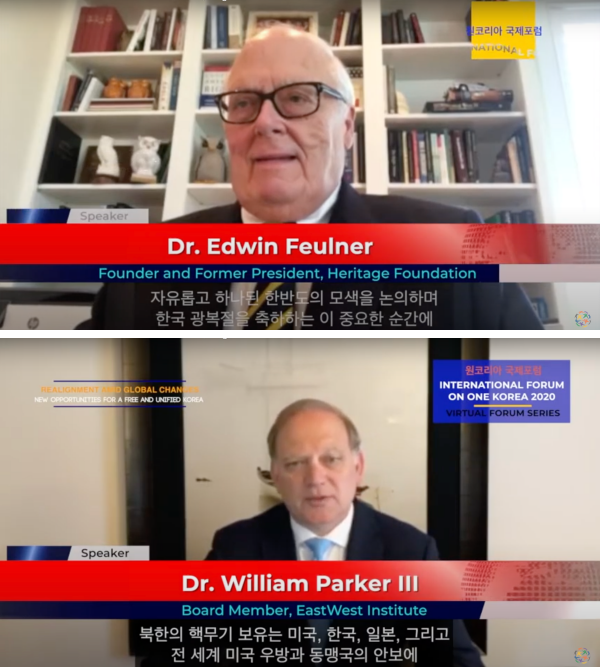 “While the current crisis presents enormous risks, it also presents opportunities; opportunities to once and for all eliminate weapons of mass destruction from the Korean peninsula; an opportunity for China to play a constructive role as an emerging great power; to welcome the people of North Korea to the world of responsible nations, in the longer term, it may allow the reunification of the Korean people under a government that is supportive of freedoms found only in democracies.”

U.S. Heritage Foundation founder Dr. Edwin Feulner said Korea today stands at an important transition point. “More than ever scholars and policy experts, faced with the failure of past efforts to improve, see Korean unification as the necessary way forward, even if difficult to achieve,” he said.

Crediting Dr. Moon’s book Korean Dream, which stressed the shared values and culture of the Korean people, Dr. Feulner said it was time to move the pursuit of unification outside of the sphere of government to engage the support of the Korean people as a whole.

“I have long been an advocate of the importance of private voluntary associations that form civil society and are the expressions of healthy vibrant democracies,” he said. “The mobilization of citizens groups around common principles and the common goal of unification will have huge significance for Koreans on both parts of the peninsula.”

Presenting a Chinese perspective, Wang Huiyao, the founder and president of the Center for China and Globalization, said “China for a long time has shown strong support for a nuclear-free Korea and peaceful unification, which benefits Korea and is in also China’s national interest.”

He reminded other panelists that a united Korea has been a neighbor of China for over 1000 years and as recently as 2014, when President Xi visited South Korea, the Chinese president “endorsed and proposed the peaceful reunification of the Korean peninsula. So, China is very, very much looking for peace, a peaceful [unification] process without the interference of foreign influence but settled by the people in both North and South Korea. We’re really looking for peace and stability, and prosperity for both Koreas and for China, for North Asia, for Asia, and for the world.”

“Religious freedom is a foundational human right and core issue of our time that will shape the future of human societies, including the prospects for Korean unification and the character of a unified Korea.”  –GPF Chairman Dr. Hyun Jin P. Moon

Acknowledging China’s growing influence and presenting the forum’s keynote address, Global Peace Foundation Chairman Dr. Moon said recent Chinese actions—its secretive response about the origin and spread of the virus, aggressive moves in the South China Sea, subordination of the rights and freedoms of Hong Kong citizens, and repression of the Uighur Muslims of Xinjiang—“show what type of global leader it will be.”

Calling religious freedom “a foundational human right [and] core issue of our time that will shape the future of human societies, including the prospects for Korean unification and the character of a unified Korea, the GPF chairman said religious freedom is “essential to human nature and pursuit of a moral, purposeful life. Every person has the right to follow their conscience and seek truth, free from the dictates of any government.” 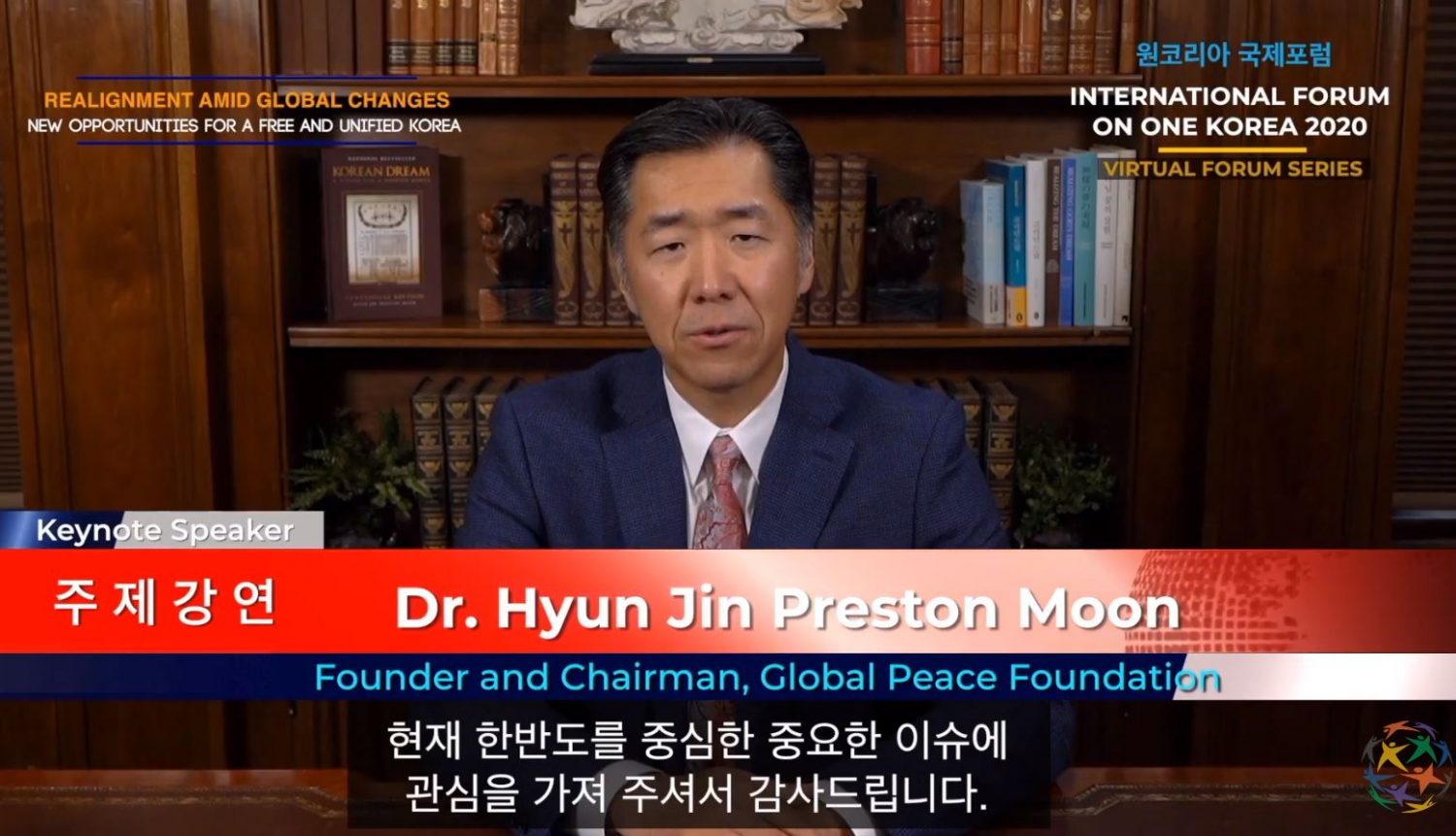 Emerging from division as a new nation, a unified Korea “must be rooted in a firm foundation of universal spiritual principles and moral values,” Dr. Moon said. “These form the essential bedrock for true liberty. Hongik Ingan—living for the greater benefit of all humanity—is the founding aspiration of the Korean people, and . . . it represents the original ethical and moral compass of the Korean nation and Korean identity.”

Given China’s statist ideology and recent actions, the GPF chairman urged the ROK’s Moon administration to rethink its current move towards China and away from its traditional alliance with the United States and Japan.

“From a strategic perspective, the U.S. should recognize the need for principled unification as the long-term permanent solution to denuclearization and regional peace. A Korean-led process for unification should become the foreign policy goal of the United States on the peninsula. It should be backed by its commitment to support the process both economically and geopolitically.”

The Korean Dream approach, he said, is already inspiring a “people-power” movement that is forging a global consensus for principled unification.

The forum presented the debut of a new Unification song, performed by K-pop artists to build international support for Korean unification.

The August forum continues an extensive record of expert forums and conferences around the world organized by the Global Peace Foundation together with the growing body of civic engagement by Action for Korea United. The convenings seek to build support for a free and unified Korea as a “third way” after decades of largely ineffective diplomatic and military attempts to resolve the global security and human rights challenges presented by the North Korean regime.