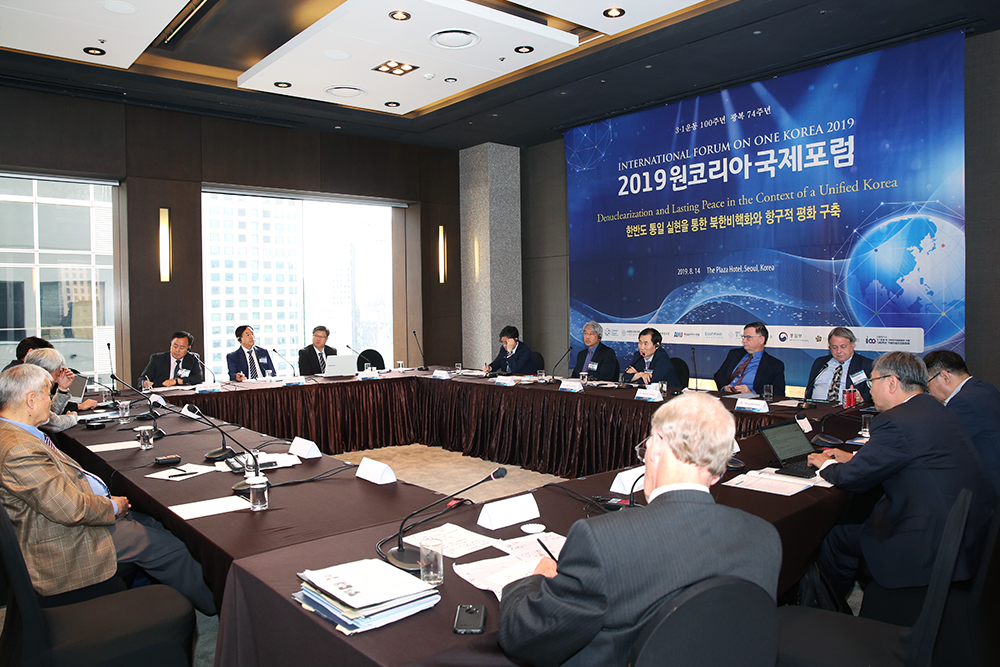 In this presentation, I will briefly discuss the need to redefine key actors related to North Korea’s denuclearization. This is carried out along with consensus building on specific definitions of both denuclearization and the end state. Next, I will chart three different scenarios related to North Korea’s possible denuclearization, with recommended strategies for each scenario in turn. Finally, I will highlight the need for strategic coordination among the regional key actors to achieve a Northeast Asian Nuclear Weapon Free Zone (NEA-NWFZ).

The Need to Redefine Key Actors

Is the North Korean nuclear issue simply one that exists between North Korea and the U.S.? Or, alternatively, is it a quadrilateral issue encompassing North Korea, the U.S., South Korea and China? North Korea’s nuclear warheads and ballistic missile capabilities are a clear and direct threat to South Korea’s national survival. Moreover, in the course of the North Korean denuclearization process, peace talks should be carried out on the Korean peninsula. China, as a regional actor and participant in the Korean War, should participate in the peace process on the peninsula.

Consensus Building on the Definitions of Denuclearization and End State

There is a clear need for a consensus regarding the definition of major terms. Two of the most important terms for us to define are “denuclearization” and “end-state.” My understanding is that from a U.S. perspective, denuclearization is defined as removal of all Weapons of Mass Destruction (WMD). This includes nuclear, chemical, and biological weapons as well as ballistic missiles.

However, from a North Korean perspective, denuclearization could simply be defined as the dismantling of Youngbyun nuclear facilities. There is a clear difference between these two understandings. However, North Korea could consider further measures should the situation permit. Conversely, it could also demand that the U.S. deploy no strategic assets on the Korean Peninsula.

Finally, the term “end state” needs to be settled. The term could be defined as U.S.-DPRK normalization with the signing of a peace treaty between the two Koreas, the U.S. and China, along with the complete denuclearization of the Korean Peninsula.

We should prepare for all three scenarios and develop strategies for each one. If we are determined to resolve North Korea’s nuclear issue through only a diplomatic process, any breakdown in the negotiations will be problematic. Moreover, it might be too late to switch tracks and cope successfully with the resulting contingency.

If the international community acknowledges North Korea as a de facto nuclear state, South Korea will naturally be threatened. South Korean strategic striking systems capable of successfully defending against North Korea’s nuclear and other Weapons of Mass Destruction, and Korea’s Air Defense Missile System, should be established as soon as possible. Another option is for the U.S. to redeploy its tactical nuclear warheads to the Korean peninsula.

In addition, a “Plan B” should be considered. This would include a ROK-U.S. military option with a tailored deterrence strategy (4D: Detect, Destroy, Disrupt, and Defend). This would entail the ROK and U.S. combined assets, including aircraft carriers and a low yield W76-2 thermal nuclear arsenal to counter enemy tactical nuclear weapons.

If North Korea massively increases its nuclear arsenal and ballistic missiles, the ROK will find it necessary to develop its own nuclear deterrence in order to achieve a balance, what has been referred to as Mutually Assured Destruction (MAD).

In the event of the ROK’s development of nuclear warheads, sanctions would surely follow. North Korea pursues its goal of becoming a nuclear state not only to secure the survival of its regime and counter the perceived U.S. antagonistic policies, but also attempt to communize the whole Korean peninsula through the use or threat of its nuclear arsenal. If North Korea attempts to carry out a nuclear war, then South Korea would immediately be threatened and its hard-earned freedom, prosperity and democracy would be placed in serious jeopardy. Naturally, this should be prevented at all costs.

Article 10 of the Nuclear Non-Proliferation Treaty dictates that each party shall have the right to withdraw from the Treaty if it decides that extraordinary events have jeopardized the supreme interests of its country.

The ROK should announce its own plans to conditionally develop nuclear warheads. It would then only abandon such plans as and when the North relinquishes its own nuclear goals.

If we acknowledge North Korea as a de facto nuclear state, or North Korea produces a large amount of nuclear warheads and ballistic missiles, regional stability and peace will never be achieved. Without the reentry of tactical nuclear warheads into the Korean Peninsula, the balance of nuclear power will be broken on the peninsula as well as in the region. This is due to the imbalance of the northern trilateral nuclear states (Russia-China-North Korea) and southern non-nuclear states (South Korea-Japan), excluding the U.S. Extended deterrence of U.S. nuclear weaponry is not a viable long-term response to achieving a regional balance of power.

Therefore, the only option is the parallel nuclear development of the ROK and Japan. Regional mutually assurance destruction would then be applicable. North Korea’s nuclear warheads would be rendered useless. Eventually there would be no reason for North Korea to retain its nuclear arsenal. Subsequently, the Northeast Asia Nuclear Weapon Free Zone will come into being.

Parallel to substantial denuclearization, including the dismantling of Youngbyun nuclear facilities, the U.S. and North Korea would likely open liaison offices in each other’s country, and four party talks (two Koreas, the U.S. and China) could be initiated to negotiate a lasting peace treaty.