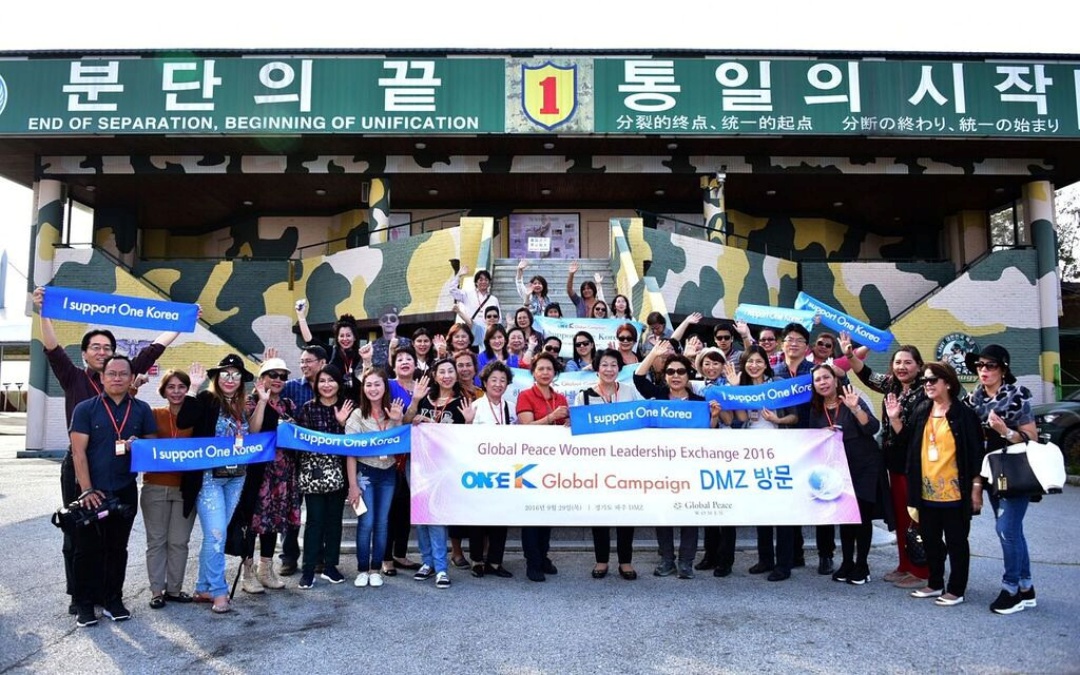 “New Approach to a Critical Turning Point: Buliding a Global Consensus for 1 Korea”

The close relationship between Korea and America, and South Korea’s esteemed role in the world, is an enduring fact of modern history, helping to shape the future of the Asia-Pacific and world peace. The cause of One Korea is a key part of this shared history and common historical task of ending the tragic division of the Korean family, featured prominently in GPF Chairman Dr. Moon Hyun Jin’s book, “The Korean Dream.”

The vision of the Korean Dream as outlined by Dr. Moon can be engaged across multi-sector, track two approaches to expand global consensus for 1 K across a number of strategic areas:

As noted in GPF reports:“In 2015, the One K Global Campaign was launched as a part of a popular movement for Korean Reunification and to contribute to a larger effort to advance regional peace and global security. The Campaign kicked off with highly publicized events in the USA, Japan and a One Korea K-Pop concert at the Seoul World Cup Stadium in South Korea, reaching millions of people across the globe through social media.

• 1,000 NGOs took part in the launch with 40,000 participants at the One K concert engaging over 30 top K-Pop Stars who performed at Seoul World Cup Stadium.

• The event was reported by 400 news outlets, with messaging that reached over 200 countries with over 13 million new impressions.

• Seoul Broadcasting Station (SBS), produced and nationally broadcast the One K concert and a one-hour documentary program on the campaign.”

The growing US-Asia alliance is an essential part of this global diaspora coalition, which can be expanded to include many other Asian community stakeholders from countries such as China, India, the Philippines, Japan, Mongolia and others.

In America, Dr. Jai Ryu and the One Korea Foundation and other leading scholars, Hyepin Im, Founder and President of Korean Churches for Community Development, and many others including key Korean diaspora with the National Unification Advisory Commission have been engaged with AKU in this process. The Declaration for One United Korea was launched in front of the Lincoln Memorial last year on the 70thanniversary of the liberation and division of Korea, signed by over a thousand leaders from the Korean diaspora.

The Asia Pacific Peace and Development Service Alliance was launched at United Nations Asia headquarters in Bangkok two years ago, and has spread across Southeast Asia, including India and Nepal and Northeast Asia, including Korea, China and Mongolia. We were pleased to inaugurate and launch the Northeast Asia secretariat for service at the Korean Council on Foreign Relations keynoted by former KOICA President Kim Young Mok last October.

The Alliance is addressing the UN 2030 goals on peace and development, and establishment of a Global Peace Service Alliance engaging young leaders in environmental service, disaster response and empowerment of youth entrepreneurship through the ethos of living for the sake of others.

I would like to recognize Ingill Ra, GPF Asia Partnerships Director, and Kyung Eui Yoo, Regional Secretary General of the Asia-Pacific Service Alliance for their key leadership in this undertaking along with Dr. Marco Roncarati of UN ESCAP.

I was honored to attend a luncheon with Seo Inteck and other leaders of Action for Korea United who spoke at the International Young Leaders Assembly at the United Nations last August, hosted by Korea’s UN Ambassador Joon Oh. We discussed the power of culture in forging a global consensus for reunification, represented here today and at the United Nations by Grammy Award artists Jimmy Jam and Terry Lewis. We have seen the power of K-Pop to ignite the aspirations of young people in this quest to unite the global Korean community through the vision of Hongik Ingan.

Social media plays a powerful role in advancing One Korea, including widespread use of information technology to advance the power of freedom through millions of mobile technology users in North Korea today and around the world.

Another dimension of cultural empowerment for One Korea is the power of engaging Faith communities throughout the world to forge a consensus on universal values and human rights. I would like to recognize the leadership of AKU Standing Committee member, Honorable Choong Hwan Kim, a former National Assemblyman and Presbyterian Elder. He and other AKU leaders as well as North Korean defectors met in Washington and received the strong endorsement for the AKU campaign from Douglas Coe, the longtime leader of the National Prayer Breakfast movement founded at the time of US President Dwight Eisenhower.

GPF has organized the only International Advisory Council for Korean Reunification and Northeast Asia Peace and Development of its kind, including scholars from Korea, China, US, Mongolia, Japan and India, represented on our panel today with geopolitical insights from Professor Madhav Nalapat and Dr. Jin Shin.

Last year we convened a Korean Reunification seminar series together with the Center for Strategic International Studies in Washington, which built on the vision and strategies for Korean reunification outlined in the “Korean Dream” book, which is being released this month in English following the best-selling book’s publication in Korea.

And this past July GPF also jointly convened a think tank forum together with the US-Korea Institute at Johns Hopkins SAIS on the “Power of Freedom through Information Technology.” The forum, which included a US Congressional Briefing hosted by the US House Asia Committee Chairman, Congressman Matt Salmon, examined the unique role of the increasing number of North Korean defectors such as Kang Cheol Hwan of AKU, and more recent high ranking North Korean defectors from senior diplomatic posts in Europe as well as North Korea’s Office 39. Bipartisan Congressional legislation has been introduced to support further use of information technology in North Korea to help expose severe North Korean human rights challenges, which our colleague Greg Scarlatoiu of the Committee for Human Rights in North Korea, has prominently addressed, resulting in further action at the United Nations.

At the upcoming Global Peace Convention in Manila, each of these tracks will be highlighted as well as a Global 1 Korea concert. We invite you to join us February 28-March 2 in Manila, Philippines for this important world class convention, furthering global consciousness and support for the One Korea campaign.

This address was prepared for the Global Peace Leadership Conference held in Seoul, Korea at the end of 2016 spearheaded by Action for Korea United, a coalition of more than 800 civil society organizations advancing a grass-roots movement for Korean reunification.