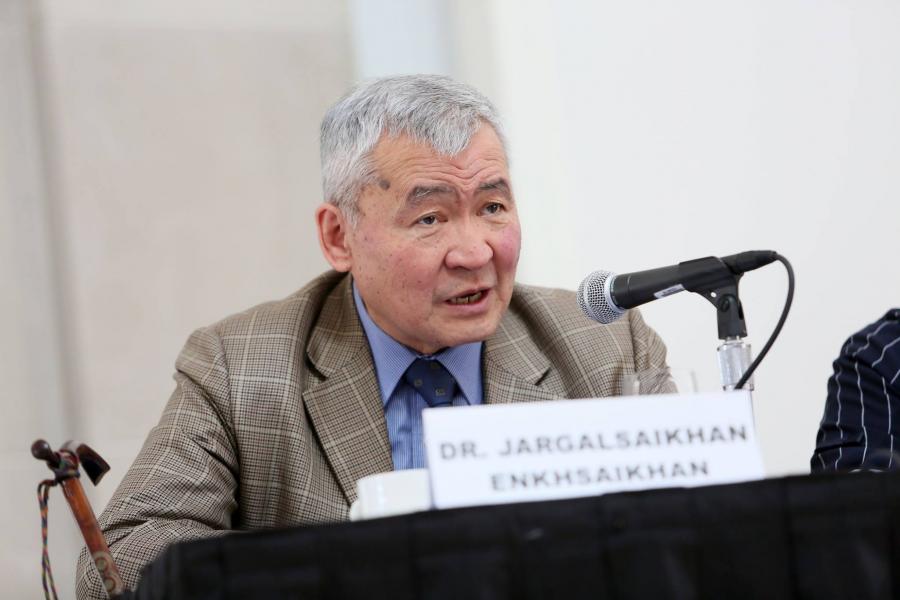 One of the still pressing issues of today is preventing nuclear weapons proliferation and taking measures to eventually rid the world of this weapon of mass destruction. However, with the technological and information revolutions underway, the task of preventing further nuclear weapons proliferation is becoming more difficult, while the Non-Proliferation Treaty regime is weakening. The signs of a possible U.S.-Russian vertical, i.e., “qualitative,” nuclear arms race are not making the task any easier. In Northeast Asia, DPRK’s nuclear weapons program has become one of the most challenging and intractable regional issues with far-reaching consequences. The recent summit and high-level meetings regarding the issue are providing a rare opportunity to politically address it. However, there is a big question if or when such meetings would succeed. What happens if they do not succeed?  Possible plans “B” or “C” need to be prepared.

Blue Banner believes that the issue of denuclearizing the Korean peninsula needs to be addressed bearing in mind the security and development interests of the entire region, since there are other states that technologically are capable of developing nuclear weapons in a matter of few years if not months. Bearing that in mind as well as the interests of other regional powers and the economic interests of the DPRK itself, Blue Banner believes that establishing a Northeast Asian nuclear-weapon-free zone (NWFZ) and providing the DPRK with a joint, credible mini Marshall Plan might be a win-win solution for the Korean peninsula as well as for overall regional security and development.

So far NWFZs have been established in geographical areas with regional political structures and where the nuclear-weapon states did not have much geopolitical stake. However, establishing NWFZs in areas where the nuclear-weapon states or great powers have geopolitical stakes or interests would be much more difficult, for example in the Middle East[1] or in Northeast Asia (NEA). To promote regional non-proliferation the U.S. should review some of its half-century-old doctrinal thinking.

The issue of establishing an NEA-NWFZ is currently not on the political agenda of the region, since the U.S. and its treaty allies are still committed more to alliance interests and structures. During the Cold War period a number of proposals to establish an NEA-NWFZ have been made. However, they have either been ignored or shot down by the opposing sides. Today establishing a NEA-NWFZ is being discussed, though on an informal basis at the levels of some regional think tanks and disarmament NGOs.

Establishing an NEA-NWFZ is not a totally new idea. It should be pointed out that when one talks about NEA-NWFZ, one means a zone consisting of the territories of two Koreas and Japan and not the entire region. The idea of establishing a zone covering the entire Northeast Asian region is a non-starter at this stage. This might be put on the agenda at a later stage when all nuclear-weapon states would be prepared to denuclearize the world under strict international control.

Establishing an NEA-NWFZ had been proposed as an idea by some states of the region since the 1970s, though the Cold War mindset did not allow addressing such proposals in all their seriousness. Since 1990s a number of unofficial initiatives have been made to establish such a zone.

In mid-1990s a proposal was made by Dr. Hiromichi Umebayashi of Peace Depot (Japan) to establish an NEA-NWFZ, covering the two Koreas and Japan, with the U.S., Russia and China expected to provide appropriate security assurances to them, known as the 3+3 formula. Similar proposals were made by others as well, differing in the range and shape of the zone as well as commitments of States parties to such a zone.

In 2011 a comprehensive approach to the issue was proposed by concluding an agreement on Peace and Security in Northeast Asia[2] that would include termination of the state of war, mutual declaration of no hostile intent, creation of a permanent council on security, provision of assistance for nuclear and other energy, termination of the sanctions and establishing an NEA-NWFZ.  Following this broader approach, the Research Center for Nuclear Weapons Abolition (RECNA), based in Nagasaki, organized a number of workshops during which concrete ideas were explored and examined that needed follow-up 1.5 track measures by governmental officials to see if these ideas could fly or form the basis of serious international moves on the issue. However, governments are still not interested in the idea.

Bearing in mind the importance of excluding nuclear weapons in the heart of NEA and the positive, yet unofficial proposals, the UN Advisory Board on Disarmament in July 2013 recommended to the United Nations Secretary-General to “take action towards establishing a NEA-NWFZ.”  In September of that year at the UN High-Level meeting on disarmament, the President of Mongolia stated that the country was “prepared, on an informal basis, to work with the countries of NEA to see if and how a NWFZ could be established in the region. Though we know well that that would not be easy and would require courage, political will and perseverance, it is doable.”[3] However, no tangible measure has been taken to follow-up on the recommendation of the Advisory Board or on Mongolian President’s proposal. Since then, RECNA[4] and other interested NGOs and think tanks of the region have promoted the idea of establishing an NEA-NWFZ. RECNA has recently made public some of the ideas of its members[5].

Recently Blue Banner has undertaken a study on the most effective way of denuclearizing the Korean peninsula and has come to a conclusion that perhaps a novel, mutually acceptable, and doable conceptual approach to the issue of denuclearizing not only the Korean peninsula but the entire Northeast Asia should be developed in which all parties would win.

A bold conceptual approach is needed to denuclearize the Korean peninsula

The four inter-Korean and the three DPRK-U.S. summits since 2018 have shown that there is political interest to work for denuclearizing the Korean peninsula on all sides.  However, the main parties need first and foremost to clearly define the notion of “denuclearizing the Korean peninsula,” since both the post-Singapore and post-Hanoi discussions have demonstrated that there is a wide conceptual gap that needs to be addressed to start serious negotiations. As is known the devil is always in details. Hence the working level-negotiations, when they start, should provide the opportunity to work more seriously towards denuclearization of the Korean peninsula rather than demanding almost unilateral denuclearization of the DPRK first or applying political and economic “maximum pressures.”

Blue Banner believes that denuclearizing the Korean peninsula, to be fully effective, needs at some stage be linked to a larger issue of establishing an NEA-NWFZ, while the bilateral DPRK-U.S. talks need, at some stage, to be expanded to include other former parties to the Six Party Talks, first and foremost the Republic of South Korea.

As things stand today, the DPRK might opt to keep some of its weapons, if not increase or further modernize them. Mindful of nuclear weapon states’ past practice, especially of the U.S., the DPRK might feel more assured by acquiring additional guarantees from its former allies—Russia and China—that the U.S. would keep its part of the deal regarding the security assurances. There is also the issue of how to ensure that the talks of economic assistance to and investment in the DPRK’s economy would in practice benefit the latter and not serve only as a mere verbal incentive for moving the political process.

Blue Banner believes that a novel conceptual approach should come first and foremost from the DPRK and the U.S. Hence the DPRK would need to make the strategic decision regarding its nuclear weapons, i.e., committing to go beyond “working toward” complete denuclearization of the Korean Peninsula, as mentioned in the Singapore joint statement.[6] On the other hand, the U.S. also needs to review some part of its almost half-century-old national security doctrine, especially the nuclear umbrella doctrine and the first use of nuclear weapons, since in this case they serve as part of the problem and hardly as part of the solution.

Since Japan and the Republic of Korea are both non-nuclear weapon states, the question would arise whether there is a need to provide them with extended nuclear deterrence if the Korean peninsula is properly denuclearized.  Frankly speaking the U.S. and its two allies each have strong conventional arsenals to counter effectively any non-nuclear threats.

A sole purpose nuclear weapons use declaration in NEA by the U.S.[7], Russia and China can play a positive, reassuring role in the region. Deterrence that excludes nuclear weapons would, until an appropriate security mechanism is agreed upon, retain intact the basic bilateral security commitments of the U.S. to Japan and the Republic of Korea. So “non-nuclear” deterrence would become part of a larger solution since it would contribute to greater predictability and stability and would avert a possible uncontrollable chain reaction leading to a regional nuclear arms race. This would, as a consequence, lead to “denuclearizing” regional war planning and military exercises.

Such tailored “non-nuclear” extended deterrence would open a way to start discussing the issue of establishing an NEA-NWFZ. It is too early to discuss the possible content of a treaty establishing an NWFZ[8], however the three nuclear weapon states, i.e., the U.S., Russia and China, would be expected to provide legally based (meaning treaty-based) security assurances to the DPRK, the Republic of Korea and Japan, while Russia and China, in the eyes of the DPRK, would make sure that the U.S. legally based assurance would give additional political weight to the agreement.

Content wise, the NEA-NWFZ treaty could also have provisions on providing economic assistance to the DPRK (some sort of a mini Marshall Plan). The U.S. president talks about the tremendous potential of the DPRK’s economic development and prosperity, while other states of the region believe that the DPRK, if allowed, can play an important economic role in the region.

Last but not least, mindful of the risk of a nuclear arms race in intermediate-range nuclear weapons in Europe and Asia as a result of abrogation of the U.S.-Russian INF treaty, it is important to make sure that Northeast Asia would not be hosting such a ground-based class of weapons. This could be reflected in the NEA-NWFZ treaty as a preventive, stabilizing and confidence-building measure.

[1] See materials of the Conference on the Establishment of a Middle East Zone Free of Nuclear Weapons and Other Weapons of Mass Destruction held on 18 November of this year in New York.

[5] See the latest intellectual contribution to the debate from the following: http://www.recna.nagasaki-u.ac.jp/recna/bd/files/Policy-Proposal-2019.pdf

[8] though, as mentioned earlier, there are already a number of concrete practical proposals that could form the basis of discussion of the substance of the issue.