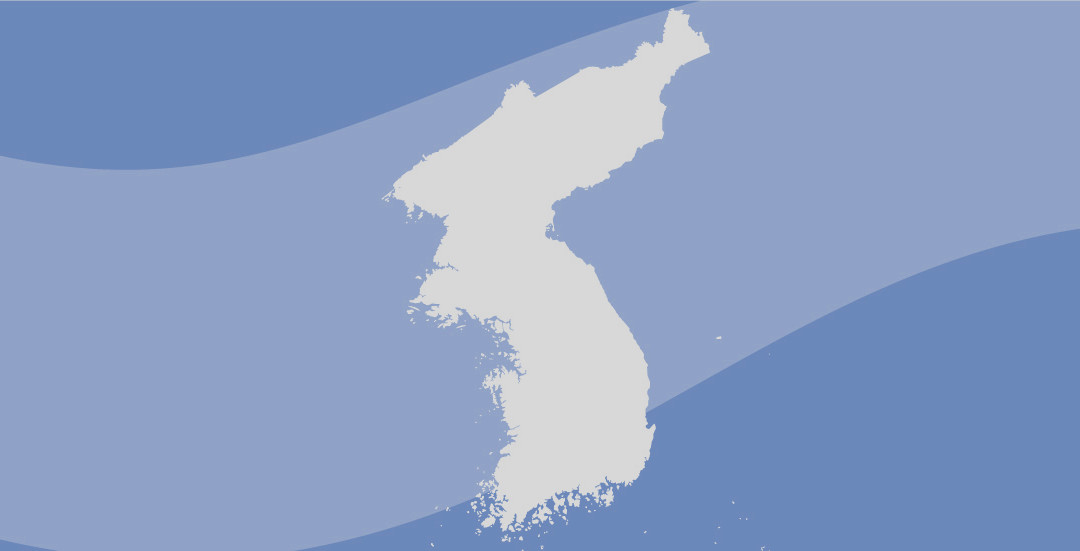 The Korean peninsula has been a global flashpoint since Japan’s surrender to Allied forces at the close of World War II, ending 40-years of colonial occupation of Korea. In the absence of a functioning government, an agreement between the United States and the Soviet Union divided the country at the 38th parallel and led to the establishment of two ideologically opposed countries in 1948, the Democratic People’s Republic of Korea in the north and Republic of Korea in the south.

On June 25, 1950, North Korea with Soviet support attacked the South in a preemptive attempt to unify the country. In response the United States and a coalition of nations, with United Nations authorization, defended South Korea and pushed back North Korean and Chinese soldiers, who had joined to war, to the 38th parallel, effectively restoring the status quo.

The Korean War ended in July 1953 with an armistice agreement, not a peace treaty, leaving North and South technically in a state of war. The heightened hostility between the two states in the decades that followed has diverted immense resources from wartime reconstruction to maintain a continuous war footing.

North Korea, with a population of some 25 million, currently deploys some 1.2 million ground forces and spends 22.3 percent of its GDP on military expenditures. South Korea’s ground forces number about 650 thousand, and with a population of 50 million spends approximately 2.8 percent of its GDP on national defense. While South Korea has seen dramatic economic development, North Korea remains mired in poverty, with a per capita GDF of just $1,800 compared with $32,000 in the South.

North Korea maintains a formidable conventional force, but it has also been aggressively developing a nuclear arsenal and other non-conventional, asymmetrical weaponry that present a major global security challenge. Despite Six-Party Talks aimed at resolving the threat of nuclear weapons on the Korean peninsula, little progress has been made.

At the height of the Cold War, North Korea secured political support, economic aid, and military protection through alliances with both China and the former Soviet Union. Following the breakup of the Soviet Union in 1989, the introduction of a market economy in both Russia and China, and other reforms in China, North Korea’s relations with both Russia and China have fundamentally altered.

With the establishment of diplomatic relations in 1992 and expansion of bi-lateral trade between Beijing and Seoul, North Korea’s erratic and belligerent behavior has become an increasing liability for China, seeking stable political relations and economic ties in the world community. In this new context, continuing to subsidize an unstable, nuclear-armed North Korea is increasingly being questioned as contrary to China’s national interests.

A divided Korea is inherently destabilizing and has shrinking strategic value for North Korea’s chief benefactors and neighbors. China, Russia, Japan and Mongolia increasingly view unification, and the opening of North Korean labor, raw materials and markets, as well as the opening of the North as a rail and highway transit corridor, in a positive light.

Public opinion in South Korea has also dramatically shifted from concerns about political and social disruptions and the costs of integrating the underdeveloped North to more forward looking and optimistic projections. South Korean President Park Geun-hye’s description of unification as an economic “bonanza” and her  landmark Dresden Declaration outlining a three-point proposal to North Korea for the “humanity, co-prosperity, and integration” of the two Koreas has powerfully influenced attitudes in the South, with recent polls showing large majorities now supporting efforts to advance unification.

The international community has an urgent interest in resolving the threat of a nuclear-armed North Korea and the potential for unchecked proliferation of weapons technology to other nations and non-state organizations. Unification of Korea, with internationally monitored guarantees of human rights, political freedoms, and denuclearization, provides the most practical, progressive and just response to the threats to regional peace and global security of a divided Korea.