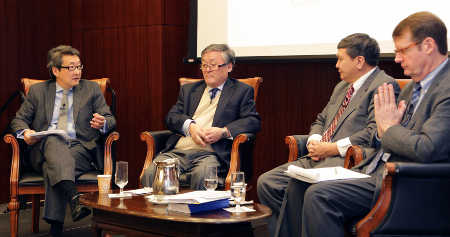 Washington, DC – A partnership between South Korea and Mongolia over their initiatives toward North Korea made perfect sense according to Ambassador Mark Minton, president of the Korea Society, and a former U.S. ambassador to Mongolia.

He was speaking at a forum on “Mongolia’s Diplomacy with the Two Koreas” on December 3, jointly sponsored by the Global Peace Foundation (GPF) and the Center for Strategic and International Studies (CSIS). The forum was the second in a series of six held jointly by GPF and CSIS designed to explore new approaches to Korean unification.

In introducing the forum, Dr. Victor Cha, the Korea chair at CSIS, said, “We don’t usually think of Mongolia in the context of peninsular diplomacy.” But he added that traditional diplomacy through the Six-Party talks repeated the same discussions on the same issues without producing any progress.

He noted the “remarkable” speech made last October in Pyongyang by Mongolia’s President Elbegdorj upholding basic human rights and freedoms and in that context was “happy to explore” Mongolia’s contribution.

Northeast Asia lies at the intersection of the geopolitical interests of major powers, noted Dr. Tsedendamba Batbayar, director-general of policy planning in Mongolia’s foreign ministry. Despite that the region lacks multi-lateral mechanisms for security or for political and economic cooperation.

After the collapse of the Soviet Union in the 1990s, Mongolia made a successful transition from a communist nation to a free market democracy. Yet it retained its relationship with North Korea and has been described as the only nation trusted by both North Korea and the United States.

Last year President Elbegdorj launched the Ulaanbaatar Dialogue on Northeast Asian Security, a track two diplomatic initiative drawing together scholars and researchers with the ear of the their governments. A conference on regional security was held last June in the Mongolian capital and another is planned for June 2015 on the theme “Energy, Infrastructure, and Regional Connectivity.”

Two other meetings have been held, one for women parliamentarians in November 2013 and one for city mayors in August 2014. Representatives from North Korea and China have attended all the meetings and altogether fourteen nations, including the U.S., have been represented.

Mongolia has also hosted Japan-North Korea talks on the issue of Japanese abductees and has offered to host any resumption of the Six-Party talks.

South Korea and Mongolia have many interests in common as Amb. Minton pointed out. In particular they are both young democracies and smaller nations surrounded by giants. To their West there are no other democracies until you reach Turkey and Eastern Europe.

He also pointed out their historical interconnections and cultural affinity, and the fact that they complement each other economically. Mongolia is resource rich, while South Korea is resource poor but technologically advanced.

Given their relative size and position in the region, an active foreign policy makes sense for Mongolia and South Korea, Amb. Minton observed. “Both countries could benefit by promoting and strengthening multi-lateral relations in the region,” he said.

GPF has long promoted the role that Mongolia play in promoting peace in the Northeast Asia region. In 2011 a Global Peace Leadership conference on that theme was held in Ulaanbaatar in cooperation with the Mongolian government.

In his recent book, “The Korean Dream,” a best-seller in Korea and winner of Book of the Year award, GPF chairman, Dr. Hyun Jin Preston Moon, mentioned talks with President Elbegdorj on this topic. “I reminded him how long and deep were the historical relations between Mongolia and Korea and told him I thought Mongolia was in a unique position to play the role of a regional broker in relation to North Korea and to unification,” he said.

“Since Mongolia had abandoned communism and embraced the free market without bloodshed, I urged him to use his country’s example to encourage North Korea to accept economic reforms and transition to a market economy. Those themes were reflected in the president’s Pyongyang address last October.

The next forum in the GPF-CSIS series on Korean unification will be held in February and will address the role of humanitarian aid and organizations in the transformation of North Korea. Subsequent forums will look at the roles played by China, Japan, and Russia in relation to the Korean peninsula.

For the original story visit here.