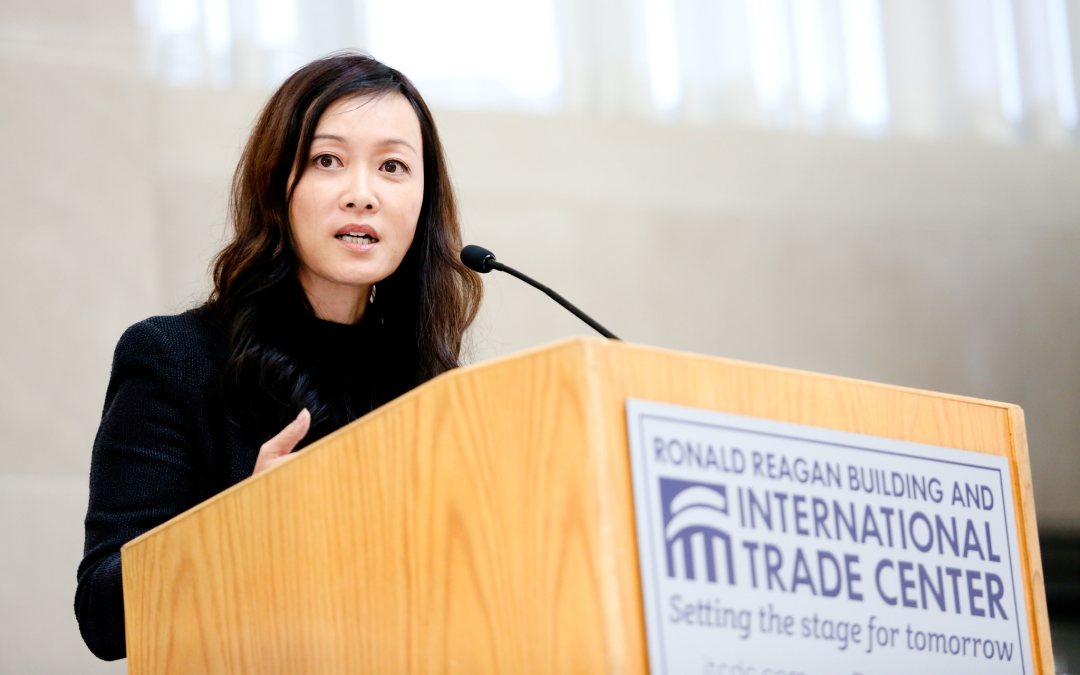 Dr. Sue Mi Terry, Senior Fellow for Korea at the Center for Strategic and International Studies

Good afternoon. Let me begin by thanking the Global Peace Foundation, Action for Korea United, EastWest Institute, One Korea Foundation and the Forum’s partners for inviting me here today to participate in this important discussion on “One Korea.” “One Korea,” “whole and free,” is an issue I feel deeply about so I couldn’t be more honored to be here today with all of you.

Since the early 1990s when the North’s nuclear crisis began in earnest, the primary objective for the US with regard to North Korea has been pretty simple: Get Pyongyang to give up its nukes, to remove the immediate threat. But I truly believe this approach to the North Korean problem–making it all about the North’s nuclear program–has been myopic and ineffective.

Having watched North Korea closely my entire adult life, I am convinced that the North Korean regime is never going to transform itself into a country that either its citizens or its neighbors can live with. Since coming into power in December 2011, Kim Jong-un has not proven himself to be any better than his father and grandfather; in fact, if anything, he has been speeding towards completing the North’s nuclear and missile capability that his father and grandfather have pursued at the cost of billions of dollars and millions of lives and he is unlikely to stop until he achieves the capability to hit mainland US with a nuclear tipped intercontinental ballistic missile. Meanwhile, the North Korean regime is and will continue to be one of the worst human rights violators and weapons proliferators on the planet. In the long-run, I truly believe there can only be one happy ending to this long-running saga with North Korea: the reunification of the Korean Peninsula.

This is why I believe while we continue to ratchet up pressure on the Kim regime by sanctions and other means, our long-term policy and goal should be promoting Korean-led peaceful unification of the two Koreas. In fact, all of us have a stake in doing what we can to promote this eventual outcome, which will be a net benefit not only to Korea but to the entire region and the world from security, economic, and human-rights perspective.

To some degree, the measures we are currently pursuing—strengthening sanctions and other pressure measures such as transmitting information into the North and highlighting the North’s human rights abuses—all help in the effort towards unification. The more we intensify economic pressure against the regime, for example, the more we shake the confidence of the elites and threaten to stir discontent among the people that Kim relies on for support. The more we enforce sanctions and cut off the money that Kim uses to buy cognac and luxury cars, the more Kim Jong-un will be left vulnerable, because he will have less foreign currency to underwrite the lifestyles of the North Korean elite whose support is essential to maintain his grip on power. And the more we get information to the North Korean people, the more we are helping to build a foundation for eventual unification.

Building positive North Korean post-unification quality of life expectations—for the public and even for the elites and the military—and getting that message into North Korea would be tremendously beneficial. At the same time, we also need to step up our efforts to highlight the North’s gulags and other systemic and widespread human rights abuses, which the UN Commission of Inquiry, in its 400-page landmark report called “crimes against humanity.”

Like apartheid South Africa, North Korea is a moral abomination. North Korea is the most repressive place on the planet. The North Korean human rights abuses constitute a core threat not just to the people of the North but also the region’s stability and prosperity and this threat is as severe as that posed by the regime’s nuclear weapons programs.

The next important step we need to take is to augment current joint military planning between the US and South Korea with a detailed and coordinated political, diplomatic, economic, cultural, educational, public-relations, and legal strategy to tackle the core unification issues likely to arise. But beyond the alliance and moving beyond the confines of the Cold War framework, we also need to begin undertaking a diplomatic offensive to secure regional and global cooperation to support Korean-led unification.

To deal with China’s concerns, for example, South Korea could explain to Beijing its plans for unification and what unified Korea’s policy might look like—a “triangulated policy,” balancing US and China and contributing to a win-win for peace in the region. Japan, too, may look askance at the prospect of unification on the Korean peninsula, but a Korean unification would present an opportunity for Japan: Japan could make important nonmilitary contributions like development assistance and aid. Japanese generosity at such a momentous time in Korean history could help repair the still fragile relationship between the two countries. The significance of unification diplomacy is already proven by the so-called “two-plus-four diplomacy” by which Germany secured cooperation of the U.S., the U.K., France, and the Soviet Union based on the two Germany’s unification negotiation.

While Korean-led unification should be supported by the regional powers, earning global support for it is also important. This effort will require not only increased cooperation between South Korea, the US, and Japan but potentially from the broader Asian community, such as Mongolia, India, and even key middle powers such as Malaysia, Indonesia and Australia. To this effort, expanding public diplomacy towards the citizens of international community by building a complex network of political circles, media, academics, and civic groups in major parties and the international community would be helpful. Thanks to an advance in media and the Internet, public opinion has a great influence on international issues and people could unite globally. (E.g. South Africa–apartheid).

But beyond these efforts, the ultimate challenge might be—not only earning regional and global support for unification—but also convincing South Korea’s own population of the wisdom of pursuing unification and building consensus over time. To this end, all of you, particularly our Korean delegation, could assist in the efforts of persuading the public that a unified Korea is an investment in the future of the Korean people, something that will most benefit the children of those paying the costs in the short term.

I don’t mean suggest that unification would be problem-free. I will be the first to admit that there will likely be manifold problems that unification could bring in the short run. Even under the best of circumstances, the reunification of South and North Korea will be more expensive and more challenging than the unification of East and West Germany, because the two Koreas are further apart in technology, economies, ideology, and education.

But assuming that we handle unification the right way, there is the potential for a very happy outcome here: One Korea, whole and free. Just imagine the benefits of freeing 25 million people from the grip of the world’s last remaining Stalinist dictatorship. Average North Koreans could move from a starvation diet, both literally and intellectually, to the plentiful availability of food, information, consumer products and all the other benefits of modern capitalism.

The majority of the North’s 80,000 to 120,000 state political prisoners could leave the government’s slave-labor camps, where most have been consigned for political, rather than, criminal offenses. In one fell swoop you would eliminate the biggest source of instability in Northeast Asia, including worries about North Korea selling nuclear weapons abroad. A unified Korea would essentially be a bigger version of South Korea—just as free and even more prosperous. A democratic country with 75 million hard-working people. The new Korea could emerge as the Germany of Asia—a new economic powerhouse and force for stability in the region.

The two Koreas have been one people, one nation since the Silla kingdom, one of the Three Kingdoms initially unified nearly all of the Korean peninsula in 668 A.D. For almost all of its history, there has been always a strong sense of unity within the Korean historical experience—one race, one language, one culture. This is what makes the current division of Korea into two halves all the more tragic and astonishing anomaly in world’s history. It is a partition that makes far less sense than the division of Germany after World War II. Germany, after all, was formed as a unified state only in 1871. There is much to be gained from reunification, so we must confront the prospect with confidence, not trepidation.